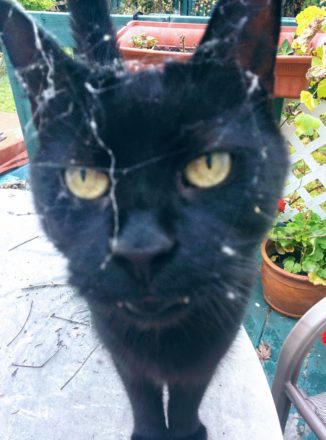 In 2013 my girlfriend left me with a mortgage, a cat, a dead car, no job and no hope. So what was the sensible thing to do? Get into Bitcoin, of course! What did I have to lose apart from my savings and sanity?  On the plus side, I could learn a few new technologies, some knowledge of trading, make friends and maybe even some money.  You can’t really profit from this kind of experiment without any skin in the game so I bought a dozen video cards and started mining Bitcoin with all the free room in now had in the house. A week later the mining difficulty rose so much my hardware investment – and everyone else’s – had become a big mistake.  And it wasn’t my last.  Hence his blog title; I feel I earned what little cryptocoin knowledge I have and maybe I can share some of it with you.  Up to you to see if you gain from it.

How did I stumble on Bitcoin? When my girlfriend took away all my hopes and dreams,  she left behind my derelict, obsolete computers from previous failed startups. I tried making money from them by selling them for parts or pay game servers. If I sold the house I would have to get rid of them anyway so maybe I could squeeze every bit I could out of them in the months it would take to change homes.  That’s when a random search took me to Bitcoin.  A few minutes of reading and I was convinced that even though it might be the riskiest bet I’d ever taken, Bitcoin and the Blockchain were the path forward for me.

I knew nothing about mining, or trading, or in fact much about finances apart from that quote from Albert Einstein about compound interest being the most powerful force in the Universe; you get to see it a lot playing Civilisation V. But I must have learned something because in those four years I centupled the small original investment. I learned a few things about Bitcoins and Blockchains, I dabbled with a few new technologies, I dabbled – and failed spectacularly, like all beginners – with day trading. But the most important thing I learned is that a lot of people – including maths-aware people that should know better – don’t know how to manage their time and money. The time I was spending questioning myself on how to eke the last 0.0001% of daily earning on my Bitcoin investment I wasn’t using to manage my fiat accounts.  Maybe because that would involve calling my investment adviser and having to learn real-world management rules whereas losing all my bitcoins is just one quick click away?

In 2016 I started looking for a similar one-click solution for my fiat investments.  I learned about I robo-advisors, which seemed like the perfect tool but my OCD got the better of me and I kept on digging. I found out about this brave new (?) world of do-it-yourself investment philosophies; sites like Mr. Money Mustache, Canadian Couch Potato and other forms of “lazy” ways to maximize your fiat returns and fixing your wasteful expenses.  In a few minutes I completely changed the way I was managing my dollars from wasting thousands a year pointlessly to earning a few hundreds back without much risk involved, simply through better awareness.

Can I apply some of those ideas just as well to cryptos?  What’s the best way to get a passive income on top of Bitcoin’s vaunted (and somewhat misleading) deflation? Can I live using cryptos, earn a decent wage, treat them as an investment as part of a retirement plan, invest them sanely, pay for a car, pair cryptos with credit cards,  not break the law  and grow a stash without knowing anything about Finances?  Can I run experiments and not die of hunger with this stuff and best of all, help you not make the same mistakes? I don’t know anything about Investing or Finances, so don’t take anything on this site as advice. I only hope you find my failures entertaining.